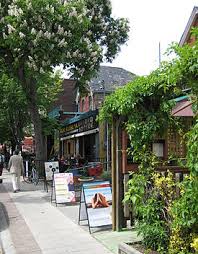 Baldwin Village is on Baldwin Street, from McCaul Street to Beverley Street.

Baldwin Village hosts Pedestrian Sundays in the summer in association with the Kensington Market neighbourhood.

Baldwin Street was laid out and named after William Warren Baldwin, who owned much of the area, in the early nineteenth century.

William Warren Baldwin (April 25, 1775 – January 8, 1844) was a doctor, businessman, lawyer, judge, architect and reform politician in Upper Canada. He, and his son Robert Baldwin, are recognized for having introduced the concept of “responsible government“, the principle of cabinet rule on which Canadian democracy is based.

The Baldwin Village neighbourhood developed in the early 20th century as an offshoot of the Kensington Market Jewish community, and the strip became home to a number of Jewish stores and restaurants.

As the Jewish community moved north from downtown, the area’s proximity to Chinatown led it to be populated by Chinese-Canadians. Mandel’s Creamery at 29 Baldwin Street, the last remnant of the block’s Jewish heritage, closed in 1995 after 90 years of operation, though the Yiddish lettering on its window has been preserved by the cafe that took over the location.

Also close to the University of Toronto and surrounded by the area known as the “Student Ghetto,” Baldwin Village also became a centre for the 1960s youth movements. Most notably it was a central location for American draft dodgers from the Vietnam War. The draft dodgers converted a number of homes to shops catering to the new community. In 1978 the first cafe on the block opened, and since then the area has become one of the best known restaurant districts in Toronto.