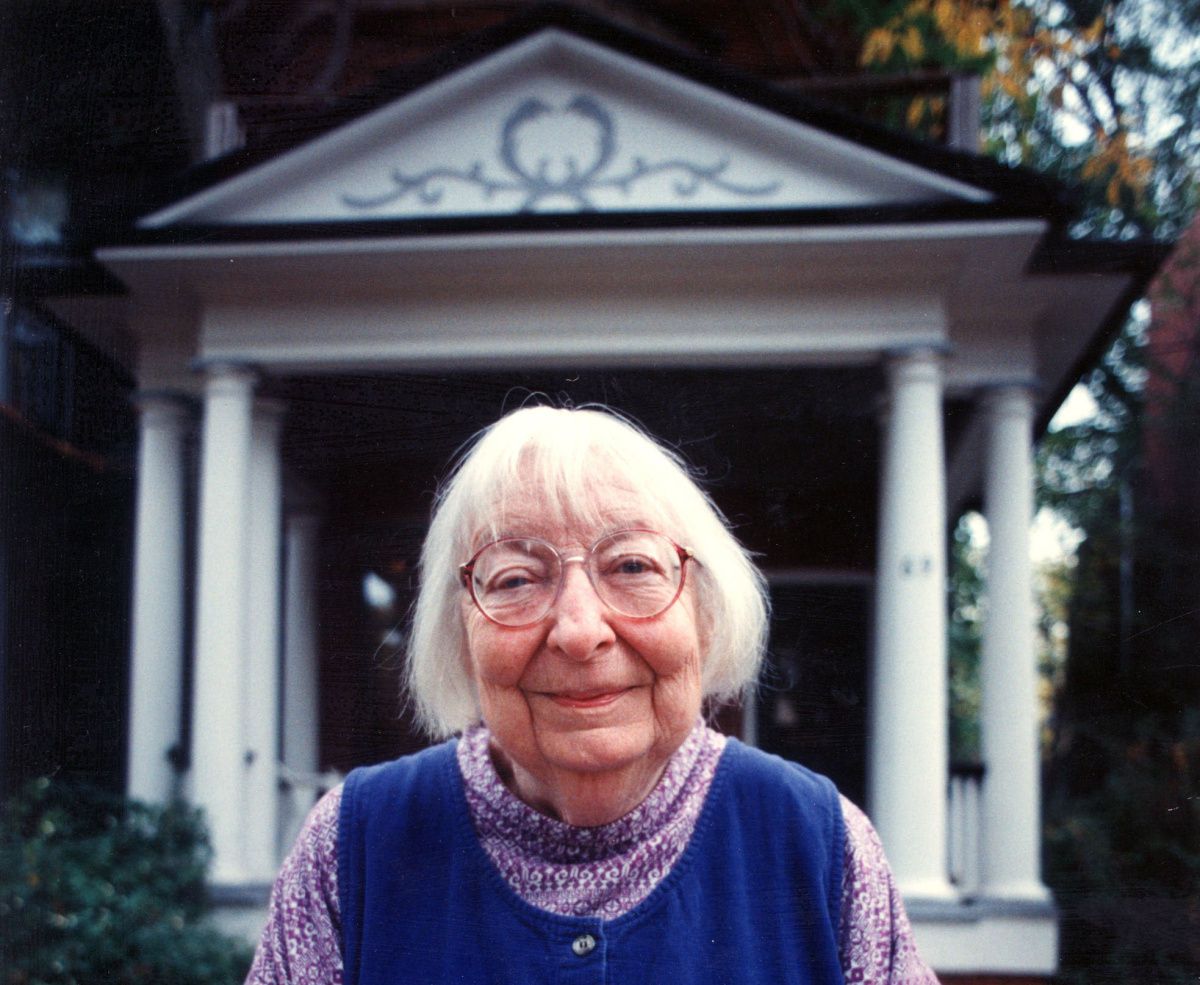 Jane Jacobs (1916-2006) is alive and well in Toronto. Her ideas are in the air, in people’s minds and everywhere you look, especially in the Grange Community.

To understand cities, Jane famously said, “You’ve got to get out and walk.”  And that’s what people are doing.  (Around the world, Jane’s Walks – those annual neighbourhood explorations named in her honour and devised mostly by local residents – take place with walks from Wuhan to Guadalajara, with some 200 different walks in Toronto alone.)

Here are a couple of things we think are important in Toronto, the city where Jane Jacobs lived for 40 years.

A Heritage Conservation District has been put in place along Queen Street, along the south edge of the Grange Community.  Heritage conservation districts are important in controlling what can be done with old buildings, and in Toronto they have traditionally been created in residential areas. Queen Street is the first commercial heritage district, famous for its narrow storefronts in buildings of two and three storeys, with shops at street level and apartments above.

Some business owners were worried, when the idea of an official heritage conservation district was proposed by city councillor Adam Vaughan, a long-time friend of Jane’s, that they would be prevented from doing whatever they wanted with their sites – for instance, tearing them down or selling assembled properties to big box stores. The threat of big chain stores and the “malling” of Queen Street was certainly one concern of the heritage proponents, but there was another concern: that the enormous popularity and commercial success of Queen Street would collapse if the very character of the street were ruined, especially by anomalous very tall buildings and massive flat storefronts.  However, many ordinary buildings, identified by an exhaustive heritage inventory as not contributing significantly to the character of the street, were not controlled by the guidelines about acceptable materials and architectural details, and so there has been plenty of room for development – as long as the overall character of the street is maintained and the “character buildings” as they’re called, are preserved. The result is just what Jane would have expected, and the pedestrian-friendly mixed-use collection of buildings of various ages and styles has been a striking economic success.

Elsewhere in the city business is booming as well. In the spring of 2011 Toronto was designated by the accounting giant PriceWaterhouseCoopers as the world’s second-best “city of opportunity” after New York.  The city regularly gets accolades like this from international ranking systems. Toronto is the world’s fourth largest financial centre. There are more high-rise buildings under construction in Toronto than in any other North American city, more than New York or Mexico City, and seven times as many as Chicago.

In the section of King Street that crosses downtown, south of the Grange area, more than 7000 new residences, mostly in condominium buildings, have been built in the last decade. This rejuvenation has come about thanks to Jane’s conversations with former mayor Barbara Hall. The area was stuck with industrial zoning, and industries were moving away, leaving many substantial buildings empty. Jane suggested undoing the zoning and various restrictive planning rules, so Mayor Hall, with the help of the city’s chief planner, convinced city council to give it a try. The result: King Street has been reborn, with homes, all kinds of businesses and commerce, and a lively streetscape. Scores of rejuvenated old buildings are no longer unemployed and new ones are growing up between them.

And yet . . .  While more and more people are living in downtown Toronto, more and more businesses that actually make things other than data are locating around Toronto rather than in it. The Canadian Urban Institute has documented the fact that Torontonians have begun to experience a kind of reverse commute, where instead of living in the suburbs and travelling downtown to work, they’re now living downtown but having to drive long distances to jobs outside the city.

There’s another dilemma that affects the neighbourhoods that ring Toronto’s central core, the area Torontonians call the inner suburbs. The inner suburbs include more than 1000 high rise apartments, the largest such concentration in North America. The neighbourhoods and their buildings were planned and built in the 1960s and 1970s following a tower-in-the-park model, that is, a tall building with a lot of “natural” space around it. Most of the apartments were designed for people who had few children, would someday move to houses, and would be able to drive to the places they needed to go.

Today a different population is living in these tall apartments – often people with limited incomes, people with children and complicated travel needs, and people who do not own a car. The towers are surrounded by lots of open space, but there’s usually no place nearby to shop, or go to school, or even to sit. Walking is tough. Planners today are well aware of this, and an ambitious city project called Tower Neighbourhood Renewal is underway.  The idea is to use zoning revisions plus tax arrangements and loan guarantees (at no net cost to the city) to encourage landlords to retrofit the insides and outsides of their buildings with green systems that will repay investments in less than a decade, and will allow commercial and institutional uses to grow between and within the towers.

A parallel series of projects by Jane’s Walk former executive director Jane Farrow and University of Toronto professor Paul Hess (the University of Toronto forms the north edge of the Grange Community) was undertaken to better understand how people get around in the high-rise apartment neighbourhoods. These walkability studies used three methods: a walk with groups of residents while they talked about how their neighbourhoods work; an individual survey that asked where and how people walk; and a workshop where residents talked about walkability while they recorded their ideas on a shared community map. Studies from ten neighbourhoods plus an overview report are available at http://janeswalk.net/old/assets/uploads_docs/Walkability_Full_Report.pdf. It turns out that neighbourhood residents know the Jacobs principles from their own experience, and are glad to articulate ways to improve their decidedly un-Jacobian neighbourhoods.

Cities, Jane Jacobs observed, need jobs, stores and homes to be literally on top of one another for economic as well as social reasons. This idea, as well as many others emphasized by Jane, has become common knowledge.  The trouble is that city-building requires careful observation (a prescription of Jane’s), infrastructure investment and political oversight.  And it requires paying – note the word – paying attention to how things work.