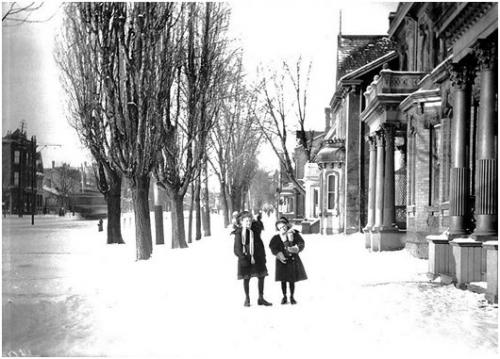 AROUND THE EDGES OF THE GRANGE

The Grange community is a Neighbourhood with a commercial/residential or Mixed Use area around the edges. These are terms defined in Toronto’s Official Plan, enforced by zoning by-laws that allow certain kinds of buildings and uses in certain places, and forbid others.

A Neighbourhood according to the Official Plan consists of residences and may include apartment/condo buildings of no more than four storeys.  A mixed use or commercial-residential area has buildings that are frequently tall with stores, offices and residences mixed together in one building.

Spadina Avenue defines the western edge of the Grange Community. It is a wide, mixed use avenue that runs between Bloor Street in the north and the Gardiner Expressway at the Lake Ontario waterfront, with a dedicated streetcar right-of-way and passenger shelters along its median.

Spadina was built beginning in 1815 from Bloor to Queen by Dr. William Baldwin. Baldwin chose its extra large width (160 feet!) and positioned the circle that is today 1 Spadina Crescent. He named the connecting Baldwin Street after himself, and Phoebe Street to the south was named after his wife Phoebe Baldwin.William Baldwin (1775-1844) was a doctor, businessman, lawyer, judge, architect and reform politician in Upper Canada. He and his son Robert Baldwin are recognized for having introduced the concept of responsible government, the principle of cabinet rule on which Canadian democracy is based.

The south end of Spadina looking toward Lake Ontario, 1927 (City of Toronto Archives)

For a number of decades, Spadina Avenue and nearby Kensington Market were the centre of Jewish life in Toronto with the area around Spadina being the home of the garment district – where many Jews worked – as well as numerous Jewish delicatessens, tailors, bookstores, cinemas, Yiddish theatres, synagogues and other political, social and cultural institutions. In the 1950s and 1960s, the Jewish community moved north along Bathurst Street, but signs of Spadina’s Jewish history can still be found in many locations.

In the mid 20th century, Toronto’s Chinatown moved west along Dundas into the Spadina area. (A Toronto Chinatown first appeared during the 1890s with the migration of American Chinese from California due to racial conflict and from the Eastern United States due to the economic depression at the time.) Toronto’s so-called First Chinatown was centred near present-day Elizabeth and Hagerman Streets. Situated in what was then known as The Ward, the city’s largest slum area for incoming immigrants, the area was expropriated in 1955 to make way for Toronto New City Hall and Nathan Philips Square. More than three-quarters of the neighbourhood was commandeered as a result of the forced dispossession, and the Chinese businesses were forced to move.

The present downtown Chinatown is centred at Spadina Avenue and Dundas Street. Although a small Chinese community was already present here prior to the 1950s, the commercial area was formed mainly when businesses moved from the First Chinatown to the Spadina location.

Toronto’s downtown Chinatown is one of the largest in North America. It reflects a diverse set of Asian cultures through its shops and restaurants, including Chinese, Vietnamese and Thai. While the majority of the grocery stores and shops remain, most of the once-famed restaurants on Dundas Street West have closed since 2000. Unlike the newer developments in the suburbs, today’s downtown Chinatown relies heavily on tourism and Chinese seniors. As many younger, higher-income immigrants have settled elsewhere in the suburbs which now have their own Chinatowns, those left in the district are typically from older generations who depend on downtown’s dense concentration of services and accessibility to public transportation.

Based on Wikipedia and www.tayloronhistory.com

College Street defines the northern edge of the Grange Community. Across College, all the way from Spadina to University, our community adjoins the campus of the University of Toronto.

College Street in the 1890s (City of Toronto Archives)

Named after King’s College, now the University of Toronto, College Street marks the southern boundary of the original 1827 land grant for the college. The street was proposed as an east-west route along the boundary, although our section was not built until 1859. The first section built was to the west of Spadina Avenue, through the estate of Robert Baldwin, who laid out the route. This section was built with a 100-foot (30 m) width.

Drinking fountain for people and horses at College and Spadina, 1899 (City of Toronto Archives)

Between University and Spadina Avenue, College Street marks the beginning of our Grange Community to the south.

College Street and McCaul Street with streetcar track diversion, looking east.  The University lands are to the left. 1930 (City of Toronto Archives)

Queen Street defines the southern edge of the Grange Community. Queen Street was the cartographical baseline for the original east-west avenues of Toronto’s grid pattern of major streets. Over the past twenty-five years, Queen West has become an international arts centre, and a major tourist attraction in Toronto.

Since the original survey in 1793 commissioned by Lieutenant Governor John Graves Simcoe, Queen Street has had several names. For its first sixty years, many sections were referred to as Lot Street. In 1837 Lot Street was renamed in honour of Queen Victoria.

The area of Queen Street between University and Spadina Avenues was a cultural nexus in the 1980s known for its cheap restaurants, clubs, eclectic mix of musicians and artists and was a haven for the punk rock scene. The late 1980s saw the relocation of CityTV to 299 Queen Street West which gentrified the area almost overnight. A more mainstream culture soon attracted wider audiences and wealthier businesses to the area. Small independent businesses started to move further west on Queen Street West past Spadina Avenue and Bathurst Street for the cheaper rent. While some original businesses have remained, the strip is now home to upscale chain stores, pricey restaurants and fast food outlets.

The broadcast hub at 299 Queen Street West at the corner of John Street – formerly the home of MuchMusic and, before that, Ryerson Press – now houses a number of Bell Media operations in a neo-Gothic heritage building faced with terra cotta. The building (below) was designed by Burke, Horwood and White in 1913 as the headquarters of the Methodist Church of Canada.

Based on Wikipedia and www.tayloronhistory.com